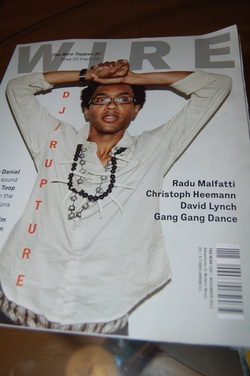 1.     People who work at the intersection of sculpture and sound must keep the midriff covered, and trouser suits must be full length and of matching material and colour. No spaghetti straps.

2.     A squonk-step artist may remove his top hat within a restaurant.

3.     Clothing that works well for the beach, yard work, dance clubs and sports contests may not be appropriate for micro-tonal tuba trios.

4.     Clothing that reveals too much cleavage, your back, your chest, your feet, your stomach or your underwear is not appropriate for grindient.

5.     The clothing of folktronica artists should be pressed and never wrinkled. All seams must be finished. 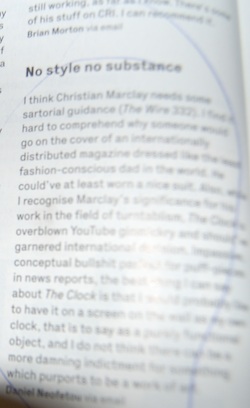 3.     Short, tight skirts that ride halfway up the thigh should be worn AT ALL TIMES for forest dub core.

4.     Turtlenecks are acceptable for drummers in a free-improvisational situation.

5.     Jeans are defined as blue or black cotton trousers with visible rivets. Female micro-bionic sound artists may wear these if the rivets are hidden by an untucked shirt.

6.     For ladies working in the field of Turkish psychedelia only formal day dress with a hat or substantial fascinator is acceptable. 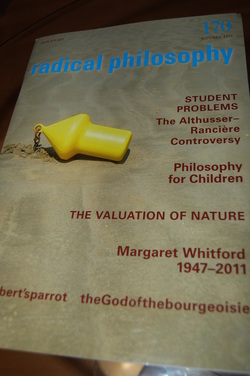 The periphery is everywhere

I said Birmingham was a phony, chain-infected ‘visitor attraction’ shithole.

She said it’s an urbanism steeped in the increasingly non-linear capitalist production of ‘themed’ urban atmospheres.

I said Birmingham ripped out my heart and crushed my soul.

She said a city is always an ex-post reality.

I said too much heavy metal music has made them all stupid.

She said nature has re-emerged in the very substance of the city itself – it’s urbanism as nature’.

She said the periphery is everywhere.

I said it was your anxiety that made me anxious and that’s why I droned on with my tedious unfunny anecdotes.

She said it’s an anxiety which prevents simple phemomena from being described simply. 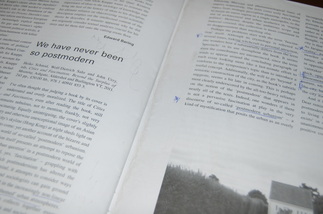 I said when you dumped me and I was suddenly single no one asked me to come for drinks they just sneaked off and met up without telling me and then I’d go home and literally cry on my own.

She said emotions are triggered by constructed atmospheres of urbanity.

I said Come Dine With Me helps me to forget.

She said culture is the thick opaque substance that separates us from phenomena outside of our control.

I said your intellectual resentment of me became so big I could get inside it and walk around.

She said emotions can have spatial characteristics; experience is a kind of ambulation that concatenates multiple overlapping relations.

She said when you watch Newsnight you look like a cat watching contemporary dance.

I said the felt reality of experience is interwoven at the fringes of perception with the conjunctively structured envelope of waveforms.

She said you’re getting the hang of this now. 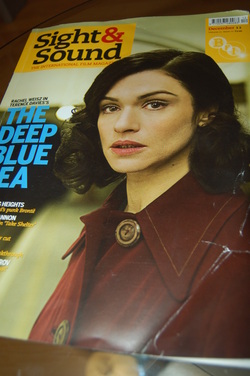 The only acceptable art form

He gets the Finglands 42 and reads Sight & Sound which is great because film is the only art form it’s acceptable for a proper man to be interested in. I sat behind him and watched him read about Lars Von Trier. He has a thick beard but I could see his lips pursing in agreement with the text. Another day I listened to him chatting on his phone about a jacket with ‘frogmouth’ pockets. Rough men have a natural interest in clothes and ‘style’.

One day he glanced at me when I was standing next to his seat waiting to get off.

I smiled. ‘Finglands buses, I love them. The way they vibrate at the stops.’

He shot his eyebrows up and smiled. He looks like he lives in a tunnel and eats rust. That’s good. I don’t want some pussy who smells of Shake n’ Vac and won’t keep his cheese in the fridge. 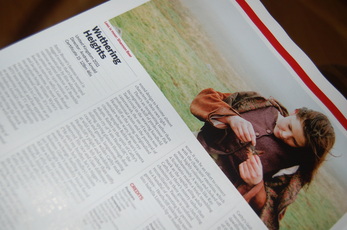 When you follow someone it’s good to make your steps in time with theirs. It makes you feel like they must feel as they walk. He walks slowly. I like a man who walks slowly.

I imagine we are on the night bus and there’s only us and it breaks down and suddenly it’s not Fallowfield it’s up on the moors and we are going WTF, and the wind is howling and the driver who looks like Mackenzie Crook goes for help and then we are alone and he pins me down on the greasy floor.

Yesterday he rang. Semen oozed out of the speaker. I imagined him leaning against scaffolding like a chained-up white rhino on Relentless. I’ve tried dating sites but the men there can’t even spell Led Zeppelin.