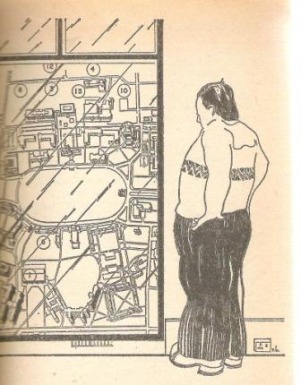 The room he was given had seven wardrobes. Seven. At night the wardrobes oppressed him. Dark brooding figures shuffling closer to his bed, faces glowering out from the whorls of polished grain. The landlord wouldn’t let him get rid of them. They were classic. Solid. So he had to think of a way to use them. The TV fitted into one, Hi Fi in another, cooking equipment in a third, and various bits and bobs in the rest. But he couldn’t think of anything to do with the last one. Then one night he dragged his duvet into it and had the best night’s sleep ever.

He decided to stay in the wardrobe. He would move in a radio, and would eat there too. Eventually he would get six more people to live in the other wardrobes. Because he was the last person to keep himself to himself.