Reviews of All The Places I've Ever Lived
​ 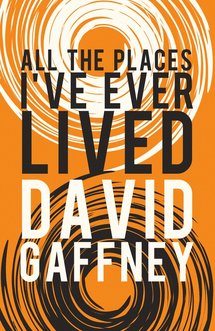 Review of David Gaffney's All The Places I've Ever Lived, by Basil Ransome-Davies for Shiny New Books

David Gaffney has earned himself a distinctive reputation as a writer of ‘flash fictions’ – micro-stories, variable in tone and topic but springing from a gonzo imagination – in the collections Sawn-off Tales and More Sawn-off Tales. Anything can happen in 150 words or so. Some of them playfully unpick language. Some employ the humour of inconsequence.  Ribaldry? Romance? Tension? Teasing non sequiturs, brilliantly taking the shaggy-dog story into outer space? He does those too, a virtuoso of the concise & elliptical.
Gaffney is a demon on counterintuitive outcomes, on what happens when people are freed from everyday logic (or denied its protection). He has a judiciously light touch, and like Tommy deVito in Goodfellas he’s a funny guy but he’s not just here to amuse us. If you like, you can even read much of what he writes as meta-fiction, an amused and amusing commentary on writing itself.
And they are not really ‘sawn-off tales’. Like Japanese water flowers they unfold and expand  when saturated with the reader’s attention. Quick to read even more than once, they create lasting reverberations of thought and feeling. Like Elmore Leonard I too often get the dismal sensation, as I heft a contemporary novel that would immobilise a cathedral door, that ‘there are too many words in this book’; that’s one reason I enjoy (and occasionally write) flash fiction.
Fortunately, Gaffney applies the principle of not wasting words in his novel, All The Places I’ve Ever Lived. In 208 pages he covers a lot of ground in space, time, and the alert though often bemused mind of the narrator. It’s a densely textured book but written with a liberating clarity of language and it lays out a welcome mat to assorted popular genres. Elements of magical realism intermingle with the familiar, ‘gritty’ kind; the paranormal with a consideration of social issues; autobiography with ethnography; the investigative crime novel with domestic comedy; the teenage rite-of-passage memoir with science fiction. This bubbling 21st-century mix the author handles with assurance and brio.
A pivot of the action is an horrific, real-world outburst of murderous violence in and around Whitehaven on the Cumbrian coast in 2010, leaving twelve dead. The unifying perspective is the consciousness of Barry Dyer, from the nearby town of Cleator Moor, a 15-year-old in 1976, whose first-person narration engages the reader with his quest to find a way through the trials and mysteries of adolescence. His apartness, or destiny, is signalled by the unaccountable (subjective?) appearance of metal implants in his flesh. Subsequently he is helped by a ghost-girl, Petal, who partners him on airborne and seaborne motor-scooter rides. Another ghost-figure, whom Barry calls ‘the diver’, seems less benign. The narrative’s convergent flow moves along the fantasy vector of the story on a time-travel adventure to a synchronic encounter with the documented killing spree that bereaved a community.
Also situated on the Cumbrian coast is Sellafield, a nuclear fuel treatment plant, providing employment but still the embodiment of an energy source that radically divides opinion. All The Places I’ve Ever Lived doesn’t overlook its actual and symbolic presence. In chapter nine Barry and his best mate Finny check out Sellafield on a search for clues, first hearing the opinions of a local farmer before an appointment with Paul Dunnery ‘Head of Community Relations’ there. The farmer is no scientist, but his workaday experience – of poisoned land and water, genetic defects in livestock – makes him doubt British Nuclear Fuel Limited’s bland public reassurances. After getting mildly rousted by armed BNFL cops, the boys pass some disturbing signs (‘RADIATION LEVEL ABOVE 25 MR/HR DO NOT LOITER’) to hear Dunnery, with his ‘joyless smile’, parrot the smug official line on nuclear power. The community, like the nation, is split. Corporate and state authority rule. The sequence ends as Petal opportunely pops up on the Defiant scooter, causing Finny to faint, and delivers a worrying prophecy of future community damage. She and Barry immediately take off to a rendezvous with death many years ahead in the following chapter.
There is no full consensus on what can and can’t be hypothetically changed by time travel – the Terminator conundrum. But if you can’t change the past can you imagine the future, one that will include all the places you’ve ever lived, all the living that may make you not the person you were as a youth? What eventuates for Barry may surprise readers – the author is a master of surprise – but it caps a novel that has has all along played fast and loose with chronology and whacked open a piñata full of goodies for any reader who likes a sharp wit and dexterous storytelling. David Gaffney’s very personal style is versatile, intelligent and fun.

​David Gaffney – All The Places I Have Ever Lived (Urbane)


When Iain Sinclair started to turn from an obscure poet, film maker and parks gardener, into a new explorer of Britain, there were places that he described as essentially ‘off the map’. This meant under-explored parts of London, of Wales, as well as stories so badly served by mainstream accounts, be they from historians or journalists, that entirely alternative readings needed to be produced.
​
The problem now is that those places, once ‘off the map’, are now firmly delineated in a new canonical cartography. Martin Rowson drew a cartoon of the Iain Sinclair A-Z, all Dr Dee and occult curate’s eggs. This cartoon now hangs in Sinclair’s study. Sinclair’s idea of what is or isn’t a psychogeographic hot zone is now wearing a bit thin. John Harris has a better manifesto, which is ‘everywhere is interesting’, or my own version of that, which is ‘nowhere is not interesting.’

David Gaffney takes us to one of the strangest and most under-explored parts of Britain, a place that is really ‘off the map’ and that is West Cumbria. There is a David Peace-esque Red Riding Trilogy sense to this book, but it is much more magical and strange. Of course, the television series The Lakes delivered an alternative view to the pleasure cruise vision of the area. But West Cumbria is not The Lakes and be very wary of suggesting so to a West Cumbrian.
This novel is also an exploration of stigmata that operates on multiple levels: The original stigmata of Catholic orthodoxy; the stigma of being from nowheresville; the possibly universal stigma arising from the foolishness of youth; the stigma of existing at odds with the status quo on an always already conservative island. The simple stigma of being ‘thin skinned’.

The main signifier for these stigmas is the metallic blisters the main character breaks out in, Gregor Samsa-like, on the opening page. For the celebrated American Sociologist, Erving Goffman, ‘stigma management’ can mean a positive or negative social reaction. If this novel is a manifestation of stigma management as Goffman figured it, it is breaking out in joyful rashes of David Lynch and then singing to them.

This novel also has shades of The Restraint of Beasts by Magnus Mills. The caravan. The moronic punk songs. The deadpan, everyday weirdness. It has that dark northern sense of doom, coupled with sheer absurdity. That the problem of life is not, as with Gregor Samsa, the eternal struggle of a basic life form, but an existence tainted by a sheer lack of seriousness from start to finish.

The probem is not necessarily that we are ruled, but that we cannot believe in or take seriously those who rule us, and our stigmas in that sense become marks of belonging to a secret tribe who were born with this truth already installed. But there is a much darker side to this idea, that under these conditions one might flip into extreme reaction.
What is truly great about this book is its confident and economic prose. One example of this is the section where the confession booth is described as ‘talking to a man in a box who is wearing a dress.’ Gaffney only needs to describe the ritual this way to explode it, to expose all its hypocrisy of sexuality, gender and belief.

This economy and skill runs all the way through the book. Fun and psychological disturbance mingle. One laughs, then one thinks, and sometimes what has been dislodged or disturbed in the mind, in your own personal history, is not immediately clear. That is not an easy thing for a novelist to pull off. But we all grew up in a locale that was strange to us, precisely because we formed as humans there. Gaffney explores his own experiences of primal strangeness through this, but in doing so makes you think about your own.

But the thing that really seperates this out from other work is that it has the bravery to deal, if tangentially, with a series of highly traumatic real-life incidents, that of the Whitehaven shootings of 2010. Not only this, but it weaves its strange fiction into the place and events.

If as Adorno said, there can be no poetry after Auschwitz, this novel seems to be prescribing ways to deal with local transgression. Moments that arrive like a lightning strike, where the darkness all around is briefly illuminated, not just on the tiny spot where the amoral transgression hits: These should be responded to by accounting for that whole surreal landscape; a freeze frame, in that one giant moment of flashbulb shock. This is what Walter Benjamin called ‘profane illumination’.

This book is a classic in a heterodox canon of works about Britain that are as far from a Bill Bryson book as it is possible to get. It is the antidote to the default daytime television view of the country, all suburban aesthetics and neatly farmed fields. It is also an alternative type of ghost story to those Sinclair tells, one not loaded with the fetish of occult figures, but stories about real people who are ghosts and the ghosts of real people.
​

​...and from Cumbria Life magazine