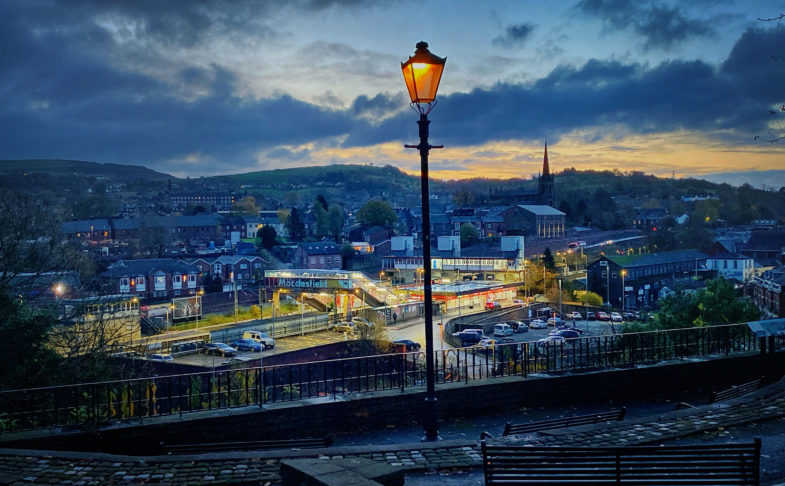 Macc Stories was a set of six brand-new short stories commissioned especially for the LIT festival in Macclesfield in November 2019.

Six acclaimed, published and award-winning writers from Manchester were invited to Macclesfield to create pieces of fiction from the point of view of outsiders, arriving on different days during early autumn to poke about the place and find out about its history and inhabitants.

They learnt why it’s called the Silk Town, discovered what’s behind the Treacle Market, explored the Forest, chatted to Maxonians and generally found inspiration in the mills and hills. All kinds of details and interpretations fed into the stories, so expect all kinds of styles and themes – everything from fashion and football to worshippers and woodlands, with some intriguing and unplanned interlinking moments.

For an extra layer of intrigue, each story was set against its own backdrop of specially commissioned visuals by Not Quite Light photographer Simon Buckley, who captures on film the half light of dawn and dusk, including the now-famous Stephen Fry-praised Lowry-esque Manchester Rainstorm, Deansgate – recently featured in the Observer.

A man stressed by imaginary health problems sees two of everything in Macclesfield...

“There’s two of everything in Macclesfield.

There are two pharmacies in the immediate vicinity of the so-called Health Hub, known to locals, older locals at least, as the doctors’.

There are two Thai restaurants, if you count Chilli Banana.
​
There are two women with pink hair on the High Peak bus idling at the stop and two men whose role it is to walk past you, one after the other, at the south end of Sunderland Street giving you looks from the middle of the night, each pushing a bicycle. Even the two bicycles contrive to look aggressive, with their thick rubber tyres and spiky lettering on the frames.”


Fashion, silk, and a furtive glimpse through a lighted window at night....

“She goes up to Sparrow Park to clear her head. Always has done. She likes the view since they chopped back some of the trees; the contrast between the industrial skyline and the wild landscape, the hills and the mills. I thought it was a shame, less nesting and roosting spots for the songbirds and the finches, but she says it gives her more space to think.

You can see across roof tiles and factory chimneys and church spires, which I expected would make a free spirit like her feel hemmed in, but she reckons it gives her more perspective. You can trace where the Silk Road and the railway line criss-cross the river, which veers off to meander along a valley brimming with bulrush-clogged mini oxbows stippling the land’s surface, herons watchful at the blurred edges, Constable-esque cattle mooching in the shallows.

On days like this, there are two ridges of peaks at the town’s border – the real ones with fairytale names like Wildboarclough and Shutlingsloe, and a shadow version where the fuzzy felt clouds sit low in the sky and threaten to smother the town. It never seems to stop raining any more.”


The Savage Chapel by Abi Hynes

Buried in the wrong place, a trapped spirt yearns to escape from its tomb...


“The church is big today. If you approach St Michael and All Angel’s from the south side, perhaps you wouldn’t know the difference, but from Church Street you can’t avoid the three levels of glass and steel. Enter, and you can see how the new enlarged nave sprawls itself like the fat belly of an old vicar, its dark stone impressively lifting your eyes and heart to heaven.

I am glad it is not a building day, but I find it disconcerting, all this chopping and changing, old to new and back again. I would like to go and rest inside the Legh chapel, which does none of this dizzying switching about, but today it is full of too-bright furnishings and books for children, and it is a more sombre atmosphere I want in which to wait for him. My own chapel is named for me, of course: the Savage Chapel.

It is my starting and my end point; the centre from which I may wander, though not far, like a tethered dog. If I stray and find myself unravelling, it is here that I come back to: encased, entombed. Safe as only the dead are safe.”


“Wind disturbs the firs. He sits in his parked car and watches. Another gust comes and it’s like the trees are passing something, surreptitiously, like school children pass cruel notes when the teacher’s back is turned. It’s August. Overcast. The car park is empty. It’s just after dawn. Early. But not for him.

He checks his mobile phone. It’s new. It receives messages.
Messages from Blair begin, ‘Hey Alec’. This, he thinks, is an American influence. Nevertheless, he enjoys the admiration of The Leader of the Opposition. It feels right that a person of that title should consult him. Blair writes, ‘Need to talk tactics.’ He, Ferguson, opens the glove box, puts the mobile phone inside. As the glove box clicks closed, he thinks, How many times have I held the Queen’s small, hard hand?

He perches on the edge of the car’s open boot. A 1992 Mercedes saloon. Silver. He removes his black leather shoes. He takes his training boots from his kitbag. He peels a leaf from the sole of one. The parallel lines of pale plastic studs look like sow’s nipples. Perhaps, he thinks, retirement will be like this. “


The Portrait by Reshma Ruia

An art exhibition in Macclesfield town hall leads to a family revelation...

“Jane Holibet was an angry woman. She had spent her life navigating the Yangtze river, crossing the Sahara desert, fighting crocodiles in the Australian outback and here she was, at Macclesfield train station, unable to find her way to the East Cheshire Hospice. She blamed the rain and her mobile that had run out of juice.

She blamed her mother for forcing her to visit an aunt she had not seen or thought about in years. Raindrops ran down her back like clumsy fingers of a drunk colleague. A fine pale mist blurred everything so that the town seemed hunkered down like a dormouse dozing under the pale outline of the distant Pennine hills.

It was a Sunday morning in October and Macclesfield was quiet. No doubt, lives were being lived and hearts being broken behind shut doors and drawn curtains but there was no one around to help Jane.”


Religion And The Decline of Magic by David Gaffney

On the way to see Macclesfield Town play Carlisle United there is a strange encounter with a mysterious drug dealer at the canal basin...

“My mother left me seven thousand pounds in her will and because we’d got into mortgage arrears of around about the same amount while I’d been unavoidably away for two years I decided to use the money to put a bet on the upcoming Carlisle Macclesfield match which everyone said would be a sure thing.

Macclesfield hadn’t scored a point all season and my team Carlisle had won their last five games. We were sure that our rugged Cumbrian heroes would easily conquer this feeble Cheshire side - so sure that my brother Oliver was coming up from London to meet me in Macclesfield specially for the occasion. He would be with the London branch of the Carlisle United Fan Club.

But regardless of the game, the outcome of which my once-in-a-lifetime legacy of seven thousand pounds was now riding on, what I liked most about going to football was the stadiums themselves, the scale of them.  Since I had returned from my enforced time away from the world I had found Manchester and its clogged roads and giant buildings claustrophobic, the numbers of people oppressive. Everyone seemed too close to everyone else all the time. A nearly empty football stadium was one of the only chances I got to see people who were very far away. “