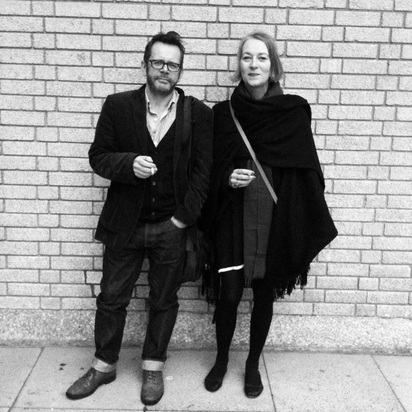 Les Malheureux is a unique collaboration between flash fiction writers David Gaffney, author of the critically acclaimed collections Sawn-off Tales, Aromabingo and The Half-life Of Songs plus the novel Never Never, and Sarah-Clare Conlon, editor of the anthology Quickies: Short Stories For Adults. This stage show combines live literature with original music and projections to deliver a completely new take on the form, and one that doesn’t take itself too seriously.

Manchester Music’s description of Les Malheureux: “A woman recites a spoken word piece … (visual demonstrations included) … while a bloke provides a squidgy plonky organ backdrop which is the icing on this quite brilliant cake.”

Expansive emotions, sweeping plots and complex characters are distilled into micro-fictions often no more than 300 words in length – some funny, some profound – and each is performed to specially composed musical pieces against a backdrop of either slide show or PowerPoint presentation.

For the next performance of Les Malheureux check live appearances

Below are a few tracks from the les Malheureux soundcloud page - in no particular order. I don't know why the image for the first track, Eat Less Pastry is so large....


For the next performance of Les Malheureux check live appearances

“An enigmatic scene of comedy that has me questioning, have I lost my mind, or have they lost theirs?” – Tom J Callaghan – October 2012. Read the full review of our Axis Arts Centre gig here.

“Thoroughly funny” – Onward, Manchester – May 2012. Read the full review of our Sounds From The Other City gig here.

“Delightful Dadaism” – Eight Cuts – March 2012. Read the full interview prior to the Not The Oxford Literary Festival here.

“Ambitious” – The Art of Fiction – September 2012. Read the full review of our involvement in the Didsbury Arts Festival Word>Play evening here.

For the next performance of Les Malheureux check live appearances

Have a look at these photos from our recent performance at The King's Arms, Salford.

You can listen to more Les Malheureux here.

Watch some videos here and here.