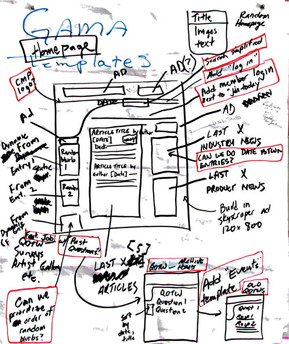 Can PowerPoint give you magic change-curve boots?

I was watching a presentation about coping with change and it got me thinking about PowerPoint. The presenter was flapping his hand towards a diagram of the change-curve, a map of the emotional trajectory we travel along when going through organisational restructure. The change-curve is roller coaster shaped, with depression at the bottom and acceptance at the top. Resistance and challenge are popular stop off points on the down slope from blissful ignorance and someone should build a cafe at denial.

This is the sort of thing that goes through my head when I’m on the receiving end of  a business presentation. It gets me thinking about PowerPoint.

My love of visual aids goes back to the days of acetates. Mr Rush, my biology teacher, had a set of complicated overlapping slides about the food chain. Hand-drawn cartoon animals appeared from behind little flaps hinged to his slides and he ended his presentation by putting a bowl of water on the overhead projector and we all went aah as his little goldfish swam about on the screen. He was miles ahead of the other teachers, whose idea of a multi-media extravaganza was sliding a sheet of paper down a screen to reveal paragraph after paragraph of minuscule text.

But with the arrival of PowerPoint even Mr Rush was stumped. It was all, well, a bit too easy. Where were the wipeable pens, the Sellotape hinges for his trapdoors?

Others embraced it. PowerPoint was a big brash theatre organ with swanee whistles and factory horns in easy reach. A flow chart could melt into a smiley faced telephone with as much profundity as a lap dissolve in a Douglas Sirk melodrama, and it all took place against a choice of backgrounds,  from lager-stained reporters notepad to velvet brothel drapes.

But there was something missing. PowerPoint, despite its surface glamour,  seemed hollow, and I didn’t know why. True, there were things I loved about it; the click-when-I-nod phenomenon when the presenter’s assistant mouses through the slides and you get the entertaining pantomime of no not that one, back a bit, forward a bit, as the presentation unfurls with all the elegance of the Chuckle brothers shifting a sideboard. These sort of things gave PowerPoint its charm, its spice.

But  I didn’t like it when PowerPoint told me how to think. I worried that PowerPoint could produce and deliver my presentations without me. Its secret mission was to steal my soul and rule the planet. It was lieutenant Ash out of Alien and I wanted to rip off its head and watch milky robot blood spurt out.

And I hated the fact that although every word and diagram was clearly displayed on the screen, people demanded handouts too, so they could look at the text on paper at the same time as the trainer paced up and down reading it off the screen.

Then there were the Neuro-linguistic Programmers, who used subliminal methods to ensure their trainees understood the mood of their message. ‘When I stand over here it means I am serious,’ a trainer explained. ‘And when I stand over there I am making a joke.’

Well, how else would they know?

And if PowerPoint offered unlimited creative opportunities, why did everything end up looking like the operating manual for an ironing board? Maybe it was too perfect. It was impossible to produce an amateur-looking presentation; every line was straight, every bullet point evenly spaced. More worryingly, everything you wrote always looked so important.

Then something in me changed. I looked at my colleague pointing at the picture of the change curve and I realised that he was enjoying himself. There is something very satisfying about standing in front of a group of people and pointing at a chart. Barry had made it even better. He had stuck a picture of his face on to a little roller coaster car and was making it slide up and down the change curve at his will. I don’t know how he had done this, but it made  everyone laugh. It was then I realised that PowerPoint offered something special to people in the workplace; office workers with few creative opportunities were getting a chance to play. PowerPoint was a new folk art and every team member could be Orson Welles.

But no sooner than I had begun to think about PowerPoint as a creative outlet, a giant hand came out of the sky and stopped my carousel from spinning. The hand belonged to the monster known as

The experts in  our communications teams didn’t want ordinary people designing things. We had been running wild on the island of PowerPoint and the professionals had to step in before we ate the fat boy.

So we got rules. Lots of them. Like the 10/20/30 rule ( no more than 10 slides, no more than  20 minutes, no smaller than a 30 point font) No whacky fonts, no words sliding on and off, no reading text off the screen. It got to the extent that some people stopped using text altogether. I was at a PowerPoint presentation about a public art strategy for a major city the other day and the presenter’s first slide was a photograph of a huge crater in a desert. Great  I thought. An artist is going to build a meteorite and smash it into part of the city. This would be aesthetically thrilling, and possibly solve a few economic problems at the same time as well a becoming a brilliant tourist attraction. But no. The presenter pointed at the crater and said this is what our public art strategy needs to have;  a big impact.