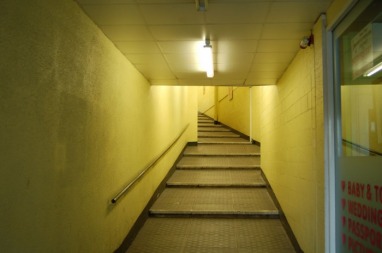 An underpass in Cleckheaton
Did you know that the first junction on the M62 is J4? That's because the first few junctions were never completed. This is the kind of fact David Gaffney knows about the M62, having visited every town along the motorway between Liverpool and Hull for a special commission in 2009. David wrote a story inspired by what he saw, heard and experienced in places like Ikea/Birchwood, Castleford, Eggborough and Pontefract, and performed them at the Humber Mouth Literature Festival accompanied by a slide show of over 300 photos he took on his travels.   The stories, including Junctions One To Four Were Never Built, all appear in David's latest collection, The Half-life of Songs.

You can read the story Junctions One To Four Were Never Built here.